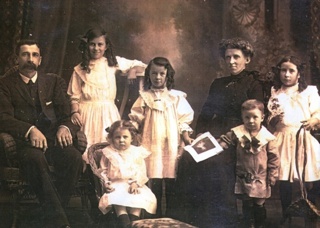 Jane Clark was 18 years old when she married Patrick at Kalgoorlie’s St Mary’s Catholic Church in July 1899. She had come to Kalgoorlie with her older brothers, Frank and Donald, two years earlier. Frank Clark had married Patrick’s sister, Rose, in April.

The Clark’s were from the Victoria gold-mining town of Clunes, although the gold had long disappeared by the 1890’s. Their father Francis was a Scot immigrant, a strict and religious man. Jane and her brothers sought not just their fortune in the goldfields of Western Australia but also some personal freedom beyond the reach of their parents.

But there was little animosity; after Jane’s first baby died in October 1899 she and Patrick moved to Clunes so that Jane could be with her parents for the birth of their second child, Frances Jane, in January 1901. They stayed in Clunes for about a year before returning to Boulder.

When Patrick returned from Clunes he took a job as a miner the Perseverance Mining Company where his brother-in-law Frank Clark also worked. There were few opportunities for individual prospectors by 1900, but with the boom in corporate mining there were plenty of opportunities for well paid employment.

Patrick and Jane in Boulder

Patrick and Jane raised most of their family in Boulder with only the youngest of eight children being born later in Melbourne. They led a comfortable life and were active members of the community.

In 1916 they bought a retail fruit business which was not as successful as they had hoped. Two years later they left Boulder for good and moved to Melbourne.

The Move to Melbourne

At first the family lived in Fitzroy, in the heart of the fashionable Smith Street shopping precinct. Later, as the older children were married and raising their own families, Pat and Jane moved to the northern suburbs of Melbourne.

After Patrick died in 1936, Jane moved to Duke Street Richmond in the inner suburbs of Melbourne where her children Doris, Mabel and Joe were all her neighbours.

A Try at Small Enterprise